Bobby Portis’ start to the new NBA season might have been a colorful one but the 22-year old’s return to action has seen him catch the eye for all the right reasons. The power forward missed the opening few weeks of the new season due to a suspension handed to him for his role in a fight with teammate Nikola Mirotic that left the Spanish international with broken bones in his face. Portis made his long-awaited return to the court as the Bulls pushed the Toronto Raptors all the way in a brave defeat, putting in an impressive performance and going some way to getting back into the management’s good books.

With Portis and Mirotic both sidelined during the early stages of the campaign, rookie Laurie Markkanen was thrown into the deep end much earlier than the Bulls would have wanted. The youngster has flourished, however, playing like a top-three pick and establishing himself as one of the real highlights from the opening few rounds of action. Despite Markkanen’s form, though, the lack of options up front had become evident, and Portis’ return has come at just the right time, especially considering his first two outings.

Against a Toronto Raptors team being tipped by many as potential dark horses in the Eastern Conference, priced at around +1400 with the latest NBA betting odds, Portis was the star of the show for the Bulls. Finishing with 21 points, 13 rebounds and four assists, Portis also impressed with his determination and work-rate throughout the game. The 22-year old followed that up with another 20-plus point showing, this time against the Pacers, once again showing why he is so highly thought of by the Bulls’ management.

In a game where very few Chicago players came out looking good, Portis did his best to drag his team-mates to his level, racking up 20 points, 11 rebounds, one assist and a steal. He might not have been as clinical as against the Raptors, but the forward was still looking to score at any chance he got, giving the Chicago management a bit of a headache with Mirotic edging closer to making his comeback. The Spaniard was expected to be the starting forward this season, but Markkanen and Portis have both done their cases no harm at all in Mirotic’s absence. 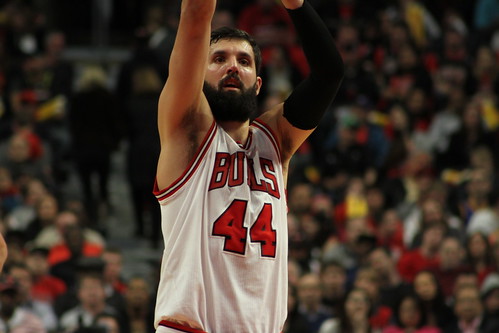 For the Bulls, they really need to start putting together a winning run. While there have been a number of promising performances, the fact is that Chicago are in danger of losing touch with their rivals already. With just two wins to their name, the Bulls’ hopes of reaching the postseason certainly don’t look good. Whether Portis or Mirotic’s returns can solve that remains to be seen, but this roster definitely looks a lot stronger with that duo back on it. With a crucial run of games coming up, the Bulls will need to go on a winning run of almost historic measures if they are going to have any chance of salvaging anything from this season.