The doldrum of summer is upon us. The only remaining hot topic of discussion in NBA news cycles is the back-and-forth battle for Minnesota Timberwolves All-Star power forward Kevin Love. The Chicago Bulls have thrust themselves back into the picture with a strong offer. Sheridan Hoops publisher and editor-in-chief, Chris Sheridan, has the scoop if you’re thirsty for details.

If you’re looking for a reprieve from all of the repetitive cycles of information, you need to go follow Philadelphia 76ers rookie Joel Embiid on Twitter.

It all started July 16. After his LeBron James recruiting campaign fell short, he turned his attention to Kim Kardashian, feigning an attempt to woo her on Twitter. Kardashian, as you likely know, is married to Kanye West.

For what can only seem like hilarity’s sake, he professed to know nothing about her marriage. A day later, he started his own hashtag, “#EMB11DsADVICE,” with which fans and followers can tweet him relationship advice.

Tuesday, he seemed torn as to whether or not he should block Kardashian. He then announced the “BREAKING NEWS” that he intended to set his sights on famous pop singer Rihanna, seemingly making a mockery of all of the Kevin Love trade rumor reports. He followed that with a dinner proposal, to which he cited his own “SOURCES” reporting that she was considering. Embiid, who is from Cameroon, then proceeded to tout his ability to speak French.

Wednesday, he kicked things up a notch. He started things off by singing the hook to one of Rihanna’s more salacious songs.

Embiid then showcased his Photoshop skills (or lack thereof) by tweeting a picture of Rihanna wearing his jersey in dress form.

That’s all I gotta say……@rihanna repping the @Sixers and my jersey number #EMB11D ( got this from JD) pic.twitter.com/QVsqP7SvGs — Joel-Hans Embiid (@JoelEmbiid) July 23, 2014

Contrast that with an image of her in the actual jersey dress. 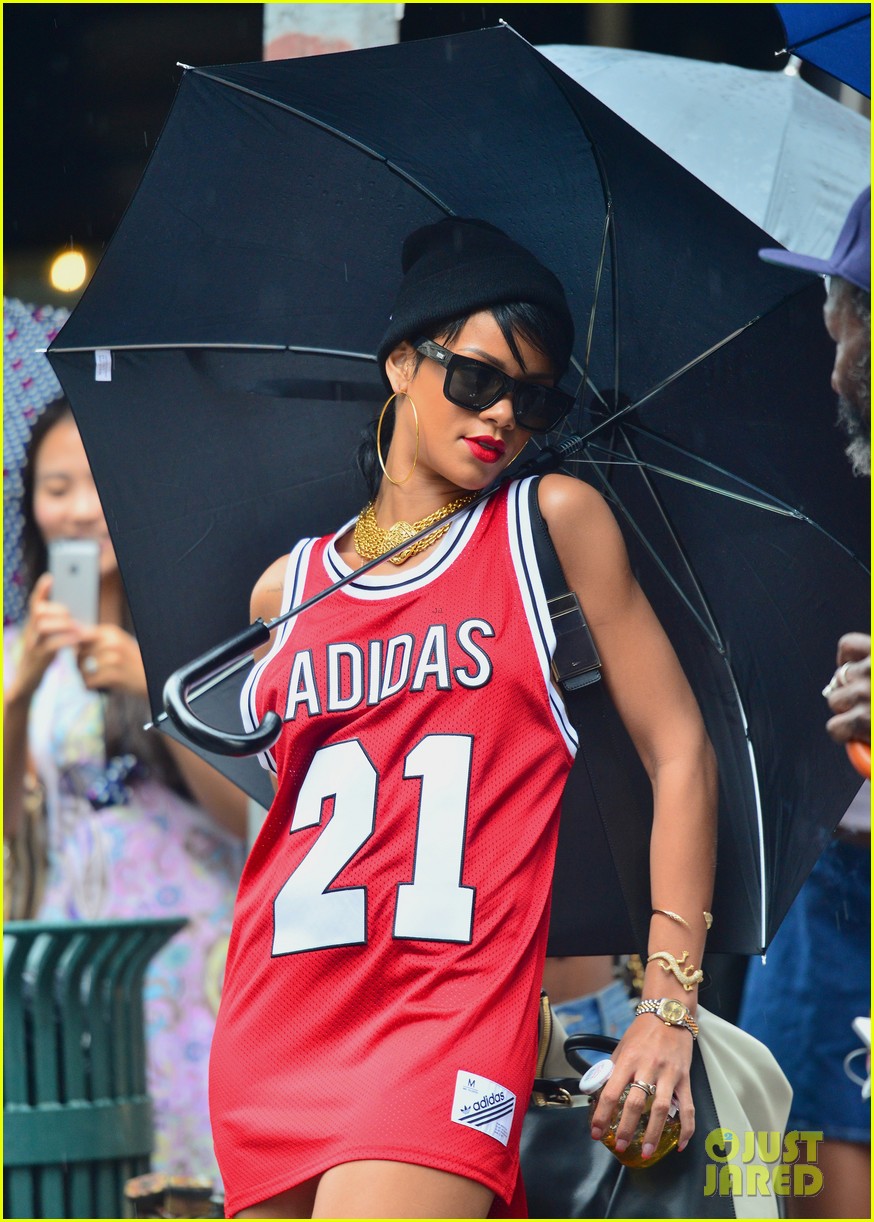 Unfortunately, though his antics seem comical to most of the world, there are those who might take his tweets at face value, assuming that he is serious about the outlandish things that he says. Thus, he addressed them, as kindly as possible.

S/O to all the (I don’t wanna say dumb but I’m gonna go ahead and say it) “DUMB” people who think that I’m serious. Not a mean guy tho.

He goes on to explain that his private life is, well, private.

He then retweeted a video posted by Katie Nolan, host of NO FILTER on FoxSports.com, detailing the top seven reasons that Rihanna should date him. She even goes so far as to create a hashtag with their names merged together as if they were a celebrity couple on TMZ.

Here are 7 reasons why @rihanna should say yes to our boy @JoelEmbiid: https://t.co/zmbiAtURsF #NoFilter

Embiid then had to address fans who misread his earlier tweet regarding his intent to keep his dating life under wraps, as they seemed to have taken the numbers, “10 or 11” (referring to female attractiveness), out of context.

He then ended the discussion with a brilliant comedic callback, referring to his newest hashtag before suggesting that he’ll be away from Twitter for a while.

#JOHANNA IM OUT for a couple weeks

Tweet of the Day: Amid Roster Change, Drummond Staying With Zero

Michael Brumagin writes the Tweet of the Day for SheridanHoops.com and is also a correspondent for BleacherReport.com. Follow @mbrumagin